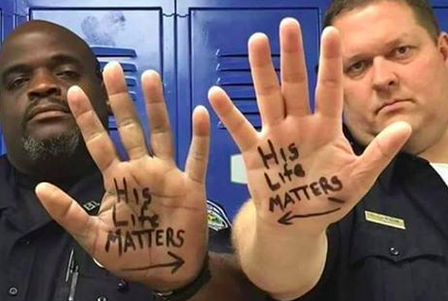 Photo Cred: Trinity Police Department
Police brutality and senseless murder of cops has started a conversation that is undeniably heated in our country over the past week. As we speak, I still refuse to watch the video of Alton Sterling’s life being unrightfully taken by Baton Rouge Police. I accidentally saw a video of Philando Castile being murdered by police while scrolling through Twitter and I wish I did not. His girlfriend and 4-year old daughter were in the car with him. Some might ask why I refuse to watch these videos since they are evidence that something is not right. At the same time, you cannot ignore that the presence of convicting evidence has not necessarily influenced the service of justice in the past.
The killing of the innocent cops that were trying to maintain order during the protests in Dallas also makes the situation trickier. Granted that there are cops out there who are irresponsible and treat people of color unfairly, it does not translate into the idea that all cops are evil. I have had good and bad interactions with cops, but I still would not go as far as saying they are all out to torment black people -- although the rate at which police brutality occurs is alarming. A situation that should be about uniting to fix the discrepancy in our justice system has now turned to an “us against them” campaign.
As a social media user, I have seen hundreds of debates that are baseless in meaning and blindly go out to either demonize cops or discredit the struggle of black people in America. There is a group that is rightfully angry at the fact that law enforcement does not afford people of color the same justice and mercy that it gives to whites. There is also the other side that is making a valid argument about the generalization of cops as racists, believing that it is leading to their unlawful killings. Both sides are right in their objections, but a division in support is exactly what we do not need at the moment.
What we need to remember is that this unrest is a result of black people speaking out against the oppression and constant mistreatment that they receive from the United State’s law enforcement. Using this opportunity to then say black people want all cops dead is doing nothing but putting us in a cycle of victims/oppressors. The most important step for us to take right now is to address the source of the problem and figure out a way forward. We have had numerous conversations about this for a long time. There was serious dialogue about police brutality when Mike Brown, Trayvon Martin, Sandra Bland, and so many others were killed. What still hasn’t happened is real action being taken against this oppressive relationship between our judicial system and people of color?
The people are tired of this continuous cycle of violence that is fueled by racial prejudice and discrimination. Although that shouldn’t translate to the killings of innocent cops, I think it further proves why we need to act now more than ever. Forming a sense of division will only push us further away from the answer. We are all disappointed at the tragedy that technology fortunately/unfortunately shows us in real time, but at least we can agree that we don’t want it to continue any longer. A gutting and honest reform is needed in our justice system in order to advocate for fairness and compassion while doing away with its toxic, discriminative members. This is a time that questions who we are; but polarizing each other wouldn’t help.